Last Saturday. Oakland Cemetery in Atlanta presented its 7th Annual Tunes From the Tombs. Oakland Cemetery is a beautiful space in the middle of Atlanta covering 48 acres and eternal home to 70,000 “residents,” including Boby Jones and Margaret Mitchell among them. The  many fascinating stones and beautiful statues and mauseleums need constant care and upkeep, so the Oakland Fouindation holds a number of events to raise money during the year. Tunes From, the Tombs us one of those.

There is music at three stages during the event: the main stage at Lion Square, the Creative Loafing  stage at North Public Square, and the Porte-Cochere  stage at the Bell Tower. There  were also “buskers” performing among the tombs. Due to my limited mobility, we stayed at the Main Stage the whole time, since there was  no way my husband and iwere not going  to be there for Delta Moon and Tinsley Ellis with his group Blues is Dead, both acts we love dearly.

Lion Square has been a pleasant place to spend a sunny afternoon since Victorian times  when families and other genteel  folkwould spread picnics on the ground.  They would not quite have pictured it the way it was Saturday with lawn chairs and men and women in shorts. They might have approved the longer flowing skirts some women wore, but been a bit shocked by the sleeveless tops!

The Square is shaded by huge trees that provide blessed shade and graced by the Lion who gives it its name:

When we arrived, it was only 12″30 and the crowd was fairly small. When the music started, only two brave peoople (I was going to say “spirits,: but that might be confusing here,) came out to dance:

That changed as the day went on, as you can see from the photo my husband took of me and the growing crowd enjoying the music a little later, and the number of people increased to the point that it was packed for Tinsley and his band.

The first group we heard, Tray Dahl & The JugTime Ragband, were very good,  playing nostalgic, good-time, jazzy music that captured the feel of the jazz years even in theo original tunes. 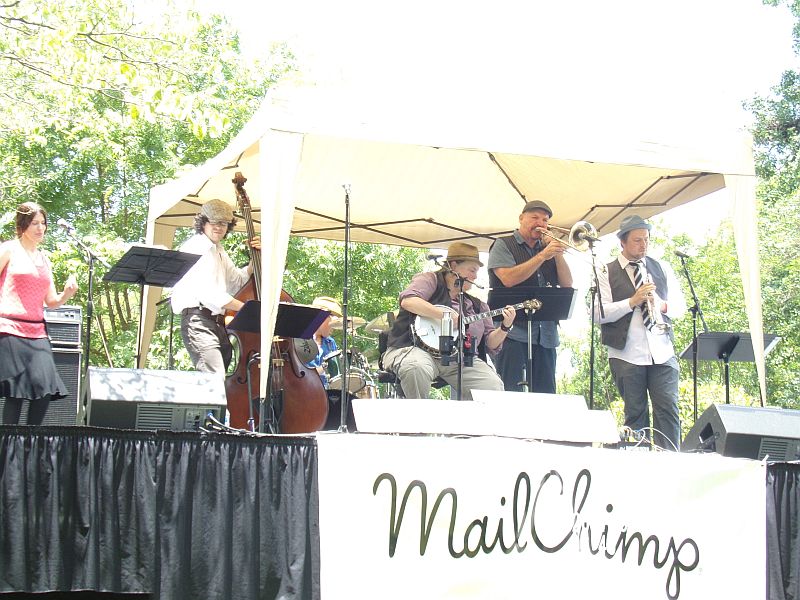 Next up were Cadillac Jones, a jazz funk band who were also just right to set the vibe for the afternoon.

The third group, Secondhand Swagger, had a great female vocalist, Abby Wren, and a vintage soul/funk/ Southern Rock sound that got the audience up and moving: 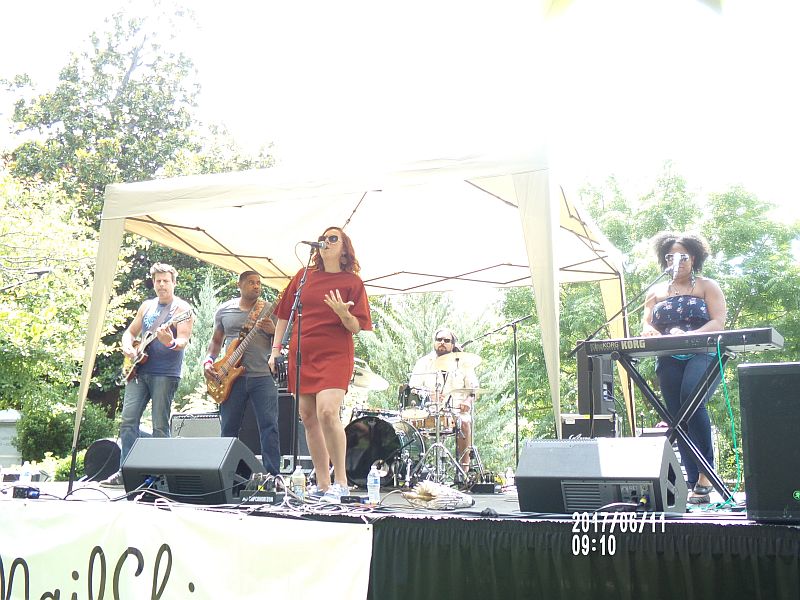 Then Delta Moon hit the stage! We were so happy to see them! They played some old fan favorites, like “Black Cat Oil” and :Hot Coffee,” and a few from their new album, Cabbagetown, which was very appropriate since Cabbagetown is the neighborhood right next to Oakland Cemetery, where lead singer Tom Gray is from. They sounded great, as you will hear in the video below

Next, it was time for Tinsley Ellis and Blues is Dead to present their tribute to col. Bruce Hampton, beloved Atlanta musician who died in May. All of the groups had acknowledged the Col., but this was the official trbiute.

I have been a fan of Tinsley Ellis since the 80’s, and he looks and sounds just as good now as he always has:

The whole set was great, but my favorite part was when drummer Yonrico Scott got up and sang Col. Bruce’s song. “Basically Frightened.” In Atlanta, Yonrico has meant “drummer” for a lot of years but not everyonreknows he can sing:

The entire event was wonderful. I love Oakland, and love to visit just to see the magnificent tombs and akk the flora and fauna. But Tunes From the Tombs is the best.and I like to think some of the “residents enjoy the music too!