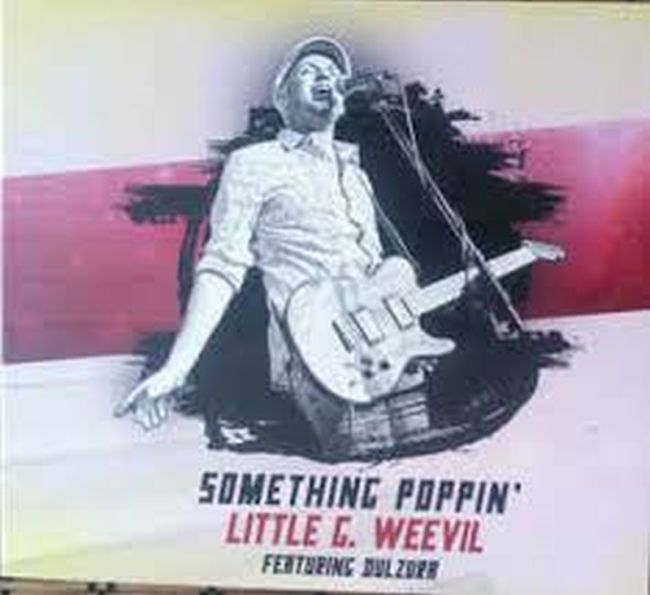 Little G Weevil has a full band with him ton Something Poppin’ and he sounds modern while keeping his blues roots not too far from the surface. Some of the songs remain closer to those roots than others, like my favorite track, “I Don’t Want To Feel the Rain,” but I also love the more urban “Something Poppin'” with its excellent female background singers and the exceptional cover of Curtis Mayfield’s “Pusherman.” In fact. I like everything on this album. All but two songs are originals.  Little G Weevil recorded it in Budapest while touring around his hometown earlier in 2017. Additional recording was done back in the states.

Along with the blues, this album incorporates funk, a bit of hip-hop, a little rap and a healthy dose of R’nB.

“Here I Come Knocking” hits listeners immediately with the full impact of that band, driven by Daniel Harper’s powerful drumming and topped by G Weevil’s rugged voice. Next comes “Something Poppin, which is a fun song with Rebekah Easton Ellis and Sharika Allen Brown adding sexy coolness to that catchy chorus.

See Me In The Country” is a gossipy song with a lot of funk. “How You Want Me To Deal With This” is the other non-original song and it is straight R’nB, very well done.”Yoo Can’t Say Nothing” makes effective use of the background singers again and of Hammond organ as well.

“Scrub” is different from anything this long-time fan has ever heard from G Weevil. Talking about this album, he said to me, “It has to be blues, cause I wrote it.” OK, but this brilliant song really stretches the definition with its brilliant rap performed by Dulzura.

“Crawling” is a pleasant piece of blues-rock with a hip-hop touch.”I Don’t Want to Feel the Rain” is a haunting biographical piece about leaving your native land and everything you’ve ever known for a dream.”Top Model” ends the album on a happy, rocking note.

For those of us used to the traditional blues of Little G Weevil’s last few albums, this is going to blow through our speakers in a way that will wake and possibly shake us. But keep listening. The more you do, the more you realize that the man is a genius and here he proves he can stay true to his beloved blues and still move with the times.